Thom grew up in the Detroit area with his six siblings and enjoyed playing baseball and basketball – much to the dismay of his piano teacher – and ‘no’, the only thing he remembers how to play is chopsticks. He made a profession of faith in Christ during high school and enjoyed growing as a young believer in college through the ministry of the Navigators.

Thom worked a couple years for a Detroit bank and in 1979 moved to East Lansing to earn his MBA degree from Michigan State. He heard about URC from a friend, began attending that fall, and upon graduating determined that East Lansing was his “greener pastures”. Grace and Thom met a few years later – he was convinced right from the start that she was “the one”. They dated for six months, broke-up for six months, got back together and then were married in 1989.

Grace is a talented musician and can frequently be found on Sunday’s playing with the URC worship team. Thom retired from his software sales job, enjoyed a nice summer vacation, and then was hired as URC’s Operations Manager. He loves administrative work and helping others behind-the-scenes.

One of his favorite Bible verses is Proverbs 4:18, which describes God’s faithfulness over a lifetime like this: “The path of the righteous is like the light of dawn which shines brighter and brighter until the full day.” The “full day” of Christ’s return will soon be upon us; until then, as we trust in him he directs our steps along the way. 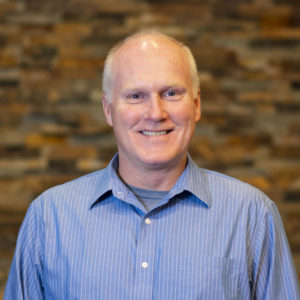