In last Sunday’s sermon, Pastor Kevin continued his series on 1st Samuel, teaching us of Saul’s election as king (1Sam 10:17-27). We can think of this day in the history of the people of Israel under three headings…

Samuel calls the people together at Mizpah, the same place where God delivered them from the Philistines, and it is here that God gives them another chance to repent. Through his prophet Samuel, God rebukes the people for rejecting him. He reminds them of his goodness and of the king that they are walking away from. He reminds them of their guilt, of their rejection of the king who delivered them. Finally, he reminds them of coming judgment by choosing their king by lots. In the same way that Achan, the one guilty of keeping back the things devoted to destruction, is found out by lot, so Saul is found out by lot. It is a picture to the people of Israel that their demand for a king will also bring judgment against them.

Here God is orchestrating his own rejection in order to bring about his glory.  In a sad irony, God has to help this rebellious people find their own king. He tells them that Saul “has hidden himself among the baggage.” Maybe Saul sees that this is not a good idea. Maybe he sees himself as a kind of Achan. What the people see is that he is tall and good looking, and that is enough to win their devotion. Though they know nothing of his character or achievements, they shout, “Long live the king!”  People have not changed since Samuel’s day. We still like those we follow to look the part, never mind what’s on the inside.

The ruler God chooses is a decent king at first. He obeys Samuel’s instruction to the people to go to their homes. Godly men follow him, and when unworthy fellows grumble about him, he shows his mercy by keeping his peace. Though Saul’s reign will ultimately fail, here we do see hints of the better king to come, hints of the king we didn’t ask for but desperately need. Saul shows mercy to his enemies by not taking vengeance on them, but another king will go much farther. He will redeem his enemies by dying for them. 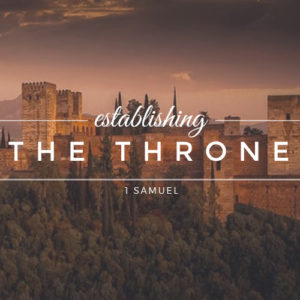